The University of Arizona is constantly making advances in cancer treatment. Two such examples in the area of radiotherapy are called intensity modulated radiation therapy (IMRT) and stereotactic radiosurgery/sterotactic radiotherapy. 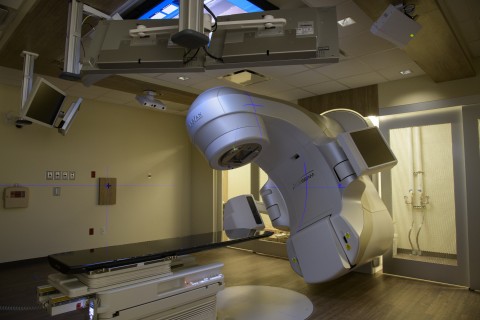 In our facilities, radiation treatments are delivered using photon and electron beams produced by seven state-of-the art linear accelerators. The beams are shaped to conformally treat the tumor while minimizing the dose to healthy tissue and organs.

IMRT is a sophisticated and effective radiation delivery system. It shapes the intensity of the radiation to deliver varying doses of radiation to small areas of tissue, conforming to the specific three-dimensional shape of almost any tumor. Doctors can deliver enough radiation to kill a tumor while sparing healthy surrounding tissue. Some IMRT techniques deliver a higher dose of radiation to the patient each day, potentially shortening the duration of the overall treatment and improving the potential for success. IMRT therapy may also lead to fewer side effects during treatment.

In low dose rate (LDR) brachytherapy, small amounts of radiation are given over a long period of time. Radioactive sources, like cesium-137 or iridium-192, are placed in small tubes or needles and implanted into the tumor. The patient stays in the hospital for a few days or can be immediately discharged, depending on the isotope used. This form of therapy is especially useful for tumors where very high and localized radiation is needed to eliminate the cancer cells. LDR brachytherapy is often used for gynecological cancer and prostate cancer.

Brachytherapy is a treatment for early stage prostate cancer, when the cancer is confined to the prostate gland.  Prostate brachytherapy involves implanting tiny pellets containing radioactive iodine or palladium into the prostate tumor where the pellets give off radiation over time.

Using transrectal ultrasound (TRUS), an image of the prostate is visible on a monitor, and used for guidance when placing up to 100 seeds or more into the prostate. There is no need for a surgical incision. Instead, the radioactive seeds (which are smaller than a grain of rice) are contained in thin needles that are passed into the prostate gland through the skin between the scrotum and anus (Perineum). This is usually performed under either a spinal or general anesthetic. As the needles penetrate through the prostate they are seen on the monitor and can be accurately guided to their final position.

The radioactivity of the pellets slowly decays during the months after the operation, and there are few long-term risks associated with this treatment.

The University of Arizona's Department of Radiation Oncology is a  well-equipped, state-of-the-art radiation therapy center. Capabilities include: